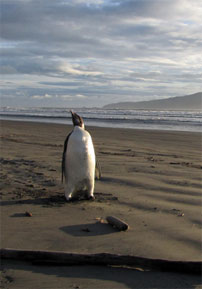 For only the second time in recorded history, an Emperor Penguin has swum 3km from Antarctica to New Zealand, making landfall at Peka Peka beach on the Kapiti Coast. Program manager for biodiversity at the Department of Conservation Peter Simpson said there has been only been one other sighting of an Emperor Penguin in New Zealand and that was in July 1967 at Oreti Beach in Southland. “Everything that [this penguin] is seeing or experiencing at the moment is a completely new experience to it,” Simpson said. “You know, that sand; it’s seeing the vegetation, the sand dunes, people, there’s a horse — horses on the beach.” Te Papa penguin expert Colin Miskelly said the penguin was one of this year’s crop of chicks. “Usually they stay among the pack ice and feed on fish and squid and krill, but this one’s kept going north,” Miskelly said. Given that it’s now midwinter in Antarctica and return travel would be difficult, Simpson says the young Emperor Penguin may have to extend its holiday.