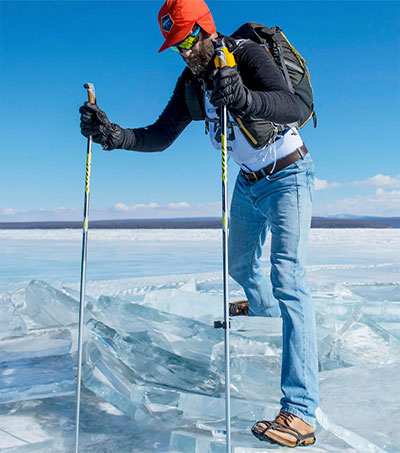 It would be hard enough completing a 160km ultra marathon across a frozen Mongolian lake with the proper equipment. New Zealander Peter Messervy-Gross, 47, performed the feat wearing his everyday fashion brogues.

Messervy-Gross had spent months accumulating winter weather kit for the Mongol 100 challenge. But his bag was lost by the Russian airline Aeroflot and rather than give up, the father-of-three decided to plough – or more likely slide – on with one of the world’s toughest challenges.

Sporting his four-year-old leatherwork brogues and the jeans he wore on the flight, Messervy-Gross managed the remarkable feat of walking the 160km across Khövsgöl Nuur, known as the Blue Pearl of Mongolia, in just four days. Temperatures at night dropped to minus 30 degrees centigrade.

He had tried to buy replacement running shoes in a department store in Mongolia’s capital Ulan Bator but discovered to his horror that nowhere stocks footwear to accommodate his size 13 feet.

“It was like the Ugly Sisters trying on Cinderella’s glass slipper,” he told the Daily Telegraph, “I couldn’t squeeze my feet into the running shoe. It wouldn’t fit and they just don’t stock anything bigger than a size 11.

“When my airport bag still didn’t show up, the penny dropped that I would have to do the race in the brogues.”

Fellow competitors dubbed him ‘the rogue in brogues’. Most of them wore specialist high-end winter walking boots or shoes while eight completed the course wearing ice skates. One cycled across the lake.

The race took its toll and Messervy-Gross, a chief information officer with a tech company, suffered painful blisters but no more.

Jim Mee, founder of Rat Race and organiser of the Mongol 100, part of its ‘bucket list’ series, was impressed by Messervy-Gross’ perseverance. “He did this with pure gusto despite his circumstances,” said Mee, of a race his company has called “the most surreal, audacious and hauntingly beautiful adventure challenge known to Man”. And that was before anybody attempted it in brogues.