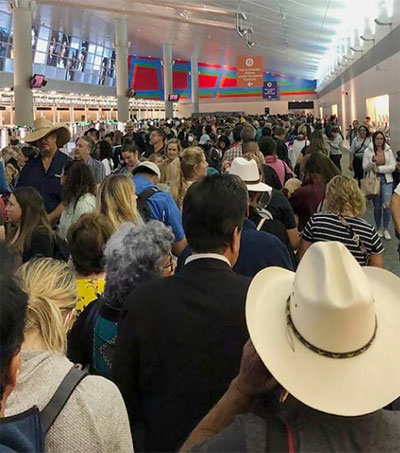 It started with an ominous email: “We urge New Zealanders currently travelling overseas to consider returning home while commercial options remain available,” the foreign affairs ministry wrote.  For citizens of the nation at the bottom of the world, long-haul travel can be stressful at the best of times – returning from the northern hemisphere usually takes a full 24 hours, including multiple stopovers. Charlotte Graham-McLay investigates on the COVID-19 fallout for The Guardian.

New Zealanders have since reported tearful and angry scenes at London’s Heathrow airport as travellers attempted to board flights home but were barred from doing so, Graham writes.

“When we arrived at the airport, we found out only people who had American visas or green cards, if you were going through Los Angeles, would be able to get on the plane,” one traveller, Haydn Read, told Radio New Zealand.

Donald Trump has instituted a travel ban on travellers from Britain and Europe. Those barred from the flight panicked because the London to Los Angeles route on Air New Zealand – the country’s national carrier – came to a halt.

The disputes as passengers attempted to push into queues for tickets with other airlines were “in some cases, physical”, Read wrote in a post on LinkedIn.

Consular advisers based in Wellington and overseas were “responding to large numbers of enquiries from New Zealanders facing unprecedented global travel disruptions,” said Kimberley Rothwell, a spokesperson for the agency.

Foreign Minister Winston Peters said last week work had begun on alternative plans – including the use of charter planes – but urged the at least 80,000 New Zealanders overseas to “get home now”, according to RNZ.

New Zealand has closed its borders to non-residents in an attempt to stop the spread of COVID-19, and gatherings of 100 or more people have been banned.

Green Party MP Chlöe Swarbrick, 25, who is currently in self-isolation having recently returned from Australia, writes about her experience for The Guardian.

“This is life in a hi-tech snowglobe, the wifi connection your invisible tether to the world outside,” Swarbrick writes. “Work has continued, but in a radically different way. Speakers’ rulings require that you wear business attire in the chamber. On the couch, tending to emails and phone calls, I’ve opted for track pants.”

“Everything that was once an urgent priority has evaporated. What matters right now is people’s health, and the certainty they feel with their and their family’s futures,” she writes.

“So far during the pandemic [New Zealand has] shown that community, a sharing economy and localised, redistributive support networks work. We’ve shown our collective power to respond in crisis. That power doesn’t disappear when the crisis does.”

Prime Minister Jacinda Ardern has now asked New Zealanders to cancel any non-essential travel around the country, and for those aged 70 or over, or with a compromised immune system, to stay home for the foreseeable future.