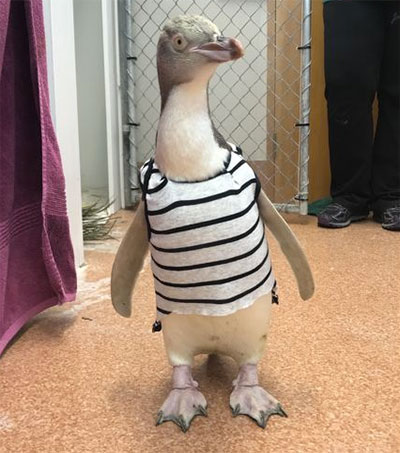 Endangered Penguins Kitted Out in Onesies

Ahead of Penguin Awareness Day on 20 January, a story has been doing the rounds about The Wildlife Hospital in Dunedin. They are using baby onesies to aid in the recuperation of endangered yellow-eyed penguins.

To prevent the penguin from scratching and plucking, the veterinary staff found an innovative solution in a baby onesie.

“We recently treated a juvenile yellow-eyed penguin with substantial feather damage. Just like any toddler, the little one insisted on picking at his wounds, not allowing new feathers to grow,” chairman of the Wildlife Hospital Trust Steve Walker said.

The penguin fashionista in question is now convalescing at Penguin Place on the Otago Peninsula, where he is something of a sensation with travellers lucky enough to catch a glimpse.

Dunedin is the wildlife capital of New Zealand, with many rare and endangered species inhabiting the surrounding area. Before the Wildlife Hospital opened in early 2018, injured yellow-eyed penguins were flown to the North Island and only had a 40-50 per cent chance of survival. That survival rate has now risen to nearly 88 per cent.

The penguins, aptly named because of their yellow eyes, breed on the east coast of New Zealand. On the Otago Peninsula, just a 10-minute drive from Dunedin city centre, numbers have dropped by 76 per cent since the mid-1990s and face possible local extinction in the next 20 to 40 years. Ongoing conservation and protection of the species is an integral part of their survival, and the Dunedin Wildlife Hospital plays a pivotal role in this.