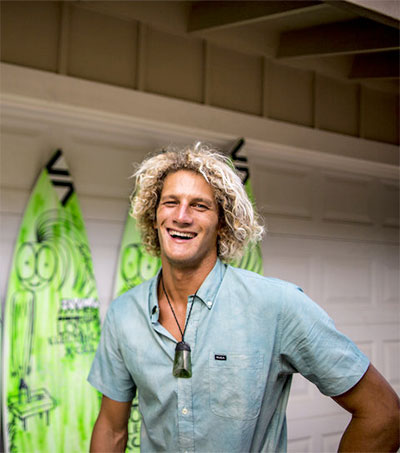 Mahia-born Ricardo Christie, 26, is the first New Zealander since Gisborne’s Maz Quinn in 2001 to qualify for surfing’s elite 2015 Dream Tour.

To say he’s done things his own way would be an understatement of the greatest order. Ricardo Christie (“It’s Richard, but my brothers called me Ricardo when I was young and it stuck …”) is a stylish, powerful surfer who burst onto the scene as a highly-touted junior, then one day seemingly vanished.

A sabbatical from competing saw Christie return refreshed, recharged, and representing a new sponsor: his friends, family and countrymen. Harnessing the goodwill of his New Zealand brethren Christie turned to crowd funding, and with his nation behind him both metaphorically and financially he stormed the ratings. From nowhere a year ago, a ninth place at the Vans World Cup in November 2014 saw him finish 16th on the Qualifying Series, booking his ticket to this year’s Dream Tour in the process.

“In just over a year I have gone from 180th to 16th on the World Qualifying Series and I think the positive energy behind me has been pretty powerful,” Christie said.

“I have been dreaming about surfing J[effreys]-Bay [South Africa] recently and can’t wait for the chance in real life next year. People believed in me, invested in me even, and hopefully I’m on the way to repaying their faith and representing Aotearoa as best I can. I’m thrilled.”