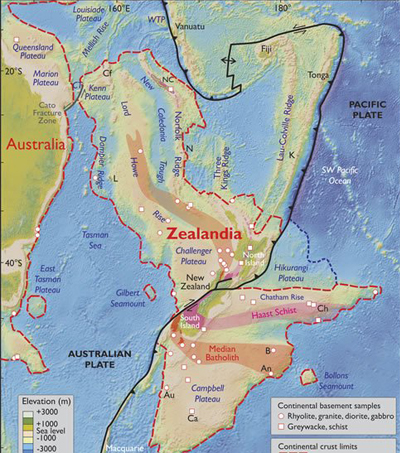 “A new study of Earth’s crust, has found that there’s a seventh geologic continent called ‘Zealandia,’ and it has been hiding under our figurative noses for millennia.” New Zealand and New Caledonia are part of the new continent, which is about as big as greater India, writes Dave Mosher in an article for Business Insider.

“The 11 researchers behind the study argue that New Zealand and New Caledonia aren’t merely an island chain. Instead, they’re both part of a single, 4.9-million-square kilometer (1.89 million-square-mile) slab of continental crust that’s distinct from Australia,” as reported in the article.

“This is not a sudden discovery but a gradual realisation; as recently as 10 years ago we would not have had the accumulated data or confidence in interpretation to write this paper,” they wrote in GSA Today, a Geological Society of America journal.

“The concept of Zealandia isn’t new.” In fact, Bruce Luyendyk, a geophysicist at the University of California, Santa Barbara (he wasn’t involved in the study) coined the word in 1995. However, he used the term to “describe New Zealand, New Caledonia, and a collection of submerged pieces and slices of crust that broke off a region of Gondwana, a 200 million-year-old supercontinent.”

Data gathered in the new study “suggests Zealandia spans “approximately the area of greater India,” or larger than Madagascar, New Guinea, Greenland, or other microcontinents and provinces.”

“The scientific value of classifying Zealandia as a continent is much more than just an extra name on a list,” wrote the scientists. “That a continent can be so submerged yet unfragmented makes it a useful and thought-provoking geodynamic end member in exploring the cohesion and breakup of continental crust.”