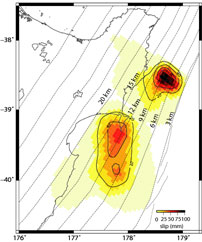 Seventy scientists from around the world will gather in Gisborne from 1-5 August to discuss proposals to study “silent” earthquakes by drilling into the seabed. Silent quakes, also known as slow slip events, occur on the boundaries of the earth’s tectonic plates, where one plate dives under another in areas known as subduction zones, and are slower than normal quakes, taking weeks or months to occur rather than seconds, and are rarely felt on the surface. Offshore Gisborne offered one of the best opportunities in the world to study the silent earthquakes because they occurred 5 to 15km below the seafloor, making the shallow part of the slip zone accessible with modern ocean drilling methods.