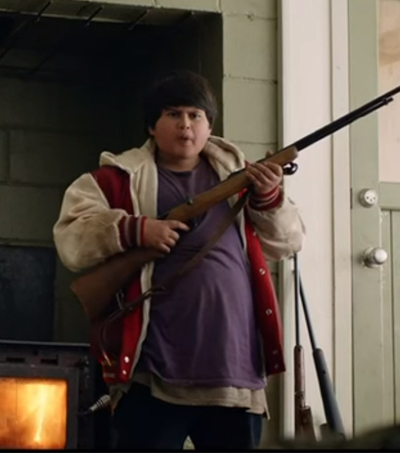 Taika Waititi spoke with Vice about his new film Hunt for the Wilderpeople, which stars Julian Dennison, Sam Neill, Rachel House, Oscar Kightley and Rhys Darby and is based on Wild Pork and Watercress – a novel by Kiwi author Barry Crump.

The project has been around since way before Waititi’s 2010 hit Boy. Waititi told Vice that he first wrote the script for other producers. He was swamped with projects.

After he finished What We Do in The Shadows he started to rewrite “the dark, depressing version of the script he wrote a decade ago and smashed out a family comedy loaded with references to Sleeping Dogs, Crash Palace, Thelma and Louise, Lord of the Rings, and everything Wes Anderson.”

“When I was writing I realised the film has a chance to celebrate New Zealand’s heritage of great adventurous filmmaking. Those guys who went before us who didn’t go to film school. They didn’t know what the equipment was called. They just made it up as they went. There’s something really cool about that,” said Waititi.

According to the Kiwi director, Hunt for the Wilderpeople is a little love letter to the style of Australasian cinema from the 70s and 80s.

In the movie “Julian Dennison plays a 13-year-old wannabe gangster who loves hip-hop so much he names his dog Tupac”. He lives with his foster uncle portrayed by Sam Neill.

Waititi told Vice that he worked with Dennison before on a commercial.

“When I made the commercial I thought I’m definitely going to find a film role for this kid because he’s so unique. Not only in his talent but his energy, his presence, the way the camera just falls in love with him.”

Shooting the film in the bush was tough. It took five weeks – four and a half of them were shot outside.

“It was the New Zealand winter. We were cold. It was usually raining. It was treacherous damp muddy conditions. It was great because there was a feeling of camaraderie—this group of people with one mission who worked their arses off to get the film made,” said Waititi.

When asked whether the way kids are raised in New Zealand is an issue that concerns him and is reflected in the movies he makes, Waititi said:

“I definitely feel passionate about that but I never like saying that is the message of my film. I feel I can subvert the idea that there are some things that need to be worked on within the social welfare system and how we all raise our kids.”

The Kiwi is currently in Los Angeles working on Marvel’s Thor franchise. He told Vice about how he handles tweets telling him not to “fuck up Thor”.

“I love those tweets. I feed off that stuff. I have to hold myself back and stop myself from engaging too much. I’m a sucker for trolling people on Twitter. I’m one of the few people that realise that Twitter is Twitter, and that Twitter is not real life. Nothing on Twitter is real.”