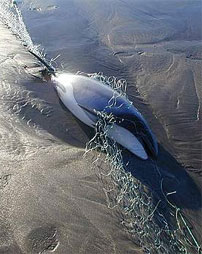 New Zealand’s Hector’s dolphin population has fallen from 30,000 to around 7000 since nylon gillnets came into use in the 1970s while subspecies Maui’s dolphin is seriously threatened with numbers falling to fewer than 100. Dr Barbara Maas, head of endangered species conservation for German environmental group NABU International — Foundation for Nature has worked to protect the species for more than a decade including for the New Zealand Department of Conservation. Maas warns that the nets, which are pulled through the water from boats, were likely to kill as many endangered Hector’s dolphins as commercial gillnets, bringing the number of deaths due to fisheries to 46 along the South Island’s east coast. “An annual loss of this size will wipe out 62 per cent of the population by 2050,” Maas says. “Only a scattering of animals will survive, potentially pushing the population beyond the point of no return.”