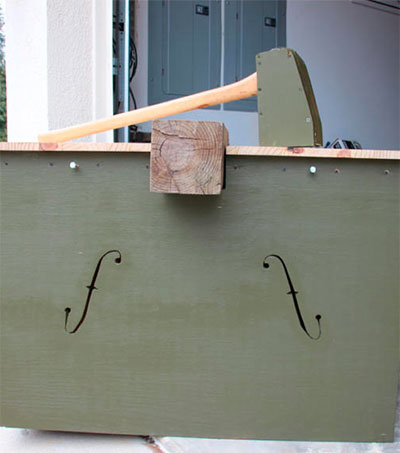 Guest conductor New Zealand-born Grant Cooper recently packed his SUV with a homemade, giant hammer and drove from West Virginia to Albuquerque to lead the New Mexico Philharmonic through the hammer blows of fate with Mahler’s Symphony No. 6 (“Tragic”) and Schubert’s Symphony No. 8 (“Unfinished”) at Popejoy Hall.

Cooper is the artistic director of the West Virginia Symphony. He constructed his own wooden hammer and a box – complete with F holes – to produce the final, devastating blows required by the finale of Mahler’s masterpiece.

“We know he was never happy with the sound of the hammer,” Cooper said of the composer. Mahler wrote the work in 1903 and 1904. At the time of its 1906 premiere, the percussionist banged on a bass drum.

“He went off the podium and hit it himself and had to laugh because it didn’t sound any better,” Cooper said.

Mahler wanted to create the sound of a tree crashing from the impact. The tree was his metaphor for the hero of the piece.

So Cooper constructed a 180-cubic-foot box from plywood. A 3-foot-long maul used for splitting wood and made of pressure-treated lumber serves as his hammer.

“I’ve cut air holes into it so that it looks like a musical instrument,” he said.

In 2012, Cooper was the recipient of a Governor’s Award for Distinguished Service in the Arts.

He lives in Charleston.