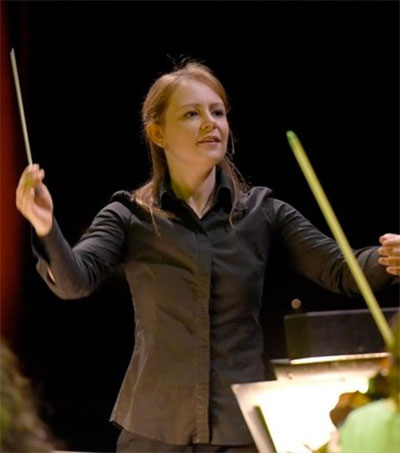 It’s been a summer of unicorns and rainbows for New Zealand-born Gemma New, according to the Hamilton Spectator’s Leonard Turnevicius. For the second summer in a row, New, music director of the Hamilton Philharmonic Orchestra and resident conductor of the St. Louis Symphony Orchestra, is a conducting fellow at the Tanglewood Music Center (TMC), the Boston Symphony Orchestra’s (BSO’s) summer academy for advanced musical study, in Massachusetts’ Berkshire Hills.

This summer’s TMC Orchestra is comprised of 107 fellows, most of them students from top American conservatories. New was one of two conducting fellows selected for the academy.

“I went for a week last year and got an idea of what’s involved,” New told The Spectator. “I thought it would be really beneficial to my artistic growth to come, and so that’s why I applied.”

In addition to Stefan Asbury, the TMC’s British-born conducting programme head, New has worked with British composer-conductor Thomas Adès, and has had a master-class with pianist Emanuel Ax on Beethoven’s “Piano Concerto No. 5” and a master-class on Beethoven’s symphonies with BSO music director Andris Nelsons.

“Andris is coming back for the last two weeks of the festival,” New said. “We’re doing two programmes with him again. So, that’s three weeks with him. It’s just been so wonderful.”

On 25 July, New was in Chicago to lead the Grant Park Orchestra before an outdoor audience she estimated at 18,000. On 14 August, she was on tap to lead the Chautauqua Symphony Orchestra in some Mendelssohn, Elgar, and Schubert.

Next summer, New is planning to participate in the newly established extension of the TMC’s 2018 conducting fellowship, a multi-week residency in Leipzig, Germany, in June 2019 working with Nelsons and the Mendelssohn-Orchesterakademie.