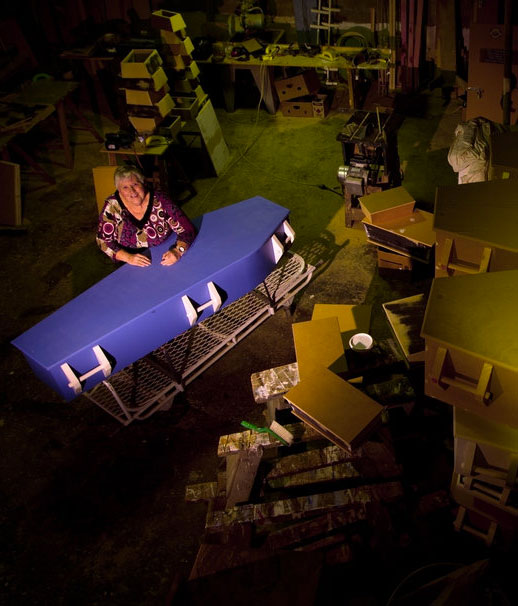 The members of New Zealand’s quirky Coffin Clubs, which consist of senior citizens who seek comfort, community, and coffin-making – is gaining popularity among New Zealanders, as well as internationally.

Coffin Club groups are popping up all over New Zealand – the original club was founded in Rotorua in 2010 by former palliative care nurse Katie Williams, 77 (pictured). During their weekly meetings, they’re challenging the grim ideas often associated with death, and the morbid, monotonous nature of many funerals.

It all started with an organisation called University of the Third Age (U3A) – an international movement dedicated to fostering lifelong learning, which gives retired and semi-retired participants the opportunity to pursue interests and meet new friends. During a U3A meeting that Williams attended, a brainstorm was happening to identify possible new club ideas within the organisation.

“For a reason that I have absolutely no idea about in retrospect, I got up and said, ‘I’d like to build my own coffin,’” Williams says. She says that she was met with initial dead silence, and then a queue of “like-minded individuals” who urged her to get the club started.

“I gathered some old blokes who were ex-carpenters and builders, and a group of women that would get creative, and we started it up in my garage and carport,” she says.

What followed is the ever-growing Coffin Clubs community of about 160 members from all over New Zealand, as well as a growing list of countries, starting with Ireland.

A musical documentary, produced by Loading Docs, has been made about the club.

Williams says that the ability for some of her members to take part in The Coffin Club has changed their lives for the better. She lets out a sigh of happiness as she exclaims, “For the people involved in the documentary, if they die tomorrow, they’ll all go out as the brightest of stars. They glow with beauty and importance.”