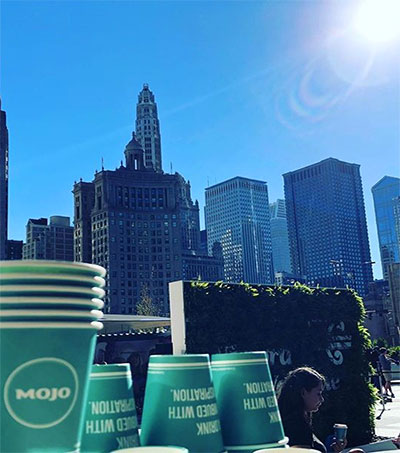 Coffee Gets Its Mojo in Chicago

New Zealand is known for its breathtaking scenery but TV station, ABC7 Chicago says one of our country’s best-known coffeehouses has been quietly serving breakfast and lunch to the Windy City’s workers for about a year.

It’s Mojo Coffee’s only location outside of New Zealand, and the original menu is pretty much intact from back home.

Since 2003, Mojo Coffee has been a constant presence in New Zealand. When they wanted to break into the US market, they first thought East Coast.

“We looked at New York first, but realised pretty quickly that for a new business breaking into this market, retail is really expensive, so a bit risky,” owner of Mojo Coffee Steven Gianoutsos said.

“Coffee’s gotta be premium. The quality has to be up there. The consistency has to be really, really good,” Gianoutsos said.

The flat white is a typical drink from down under. But they’ve also brought along an ambitious menu, with some grab-and-go in the front case, others meant for light snacking and a few ambitious dishes, considering the space limitations. “But also, we have an a la carte menu. Within that menu you’ve got breakfast items and lunch items,” Gianoutsos said.

Not only is Mojo’s menu a little bit different than what you’re accustomed to, here’s the other interesting thing: no wifi, and hence, no one sitting on laptops. The intention is come down, have a bite to eat, have your meeting and then move on.