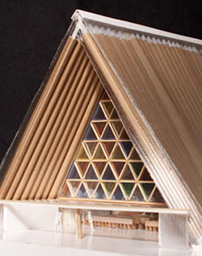 The quake-ravaged Christ Church Cathedral is set to be rebuilt – using cardboard. Since the destruction of the iconic building in February’s deadly earthquake, rebuilding the Cathedral has been deemed a priority for the city. As Christchurch has yet to decide on a permanent replacement for the well-known landmark, Japanese architect Shigeru Ban has been commissioned to create a temporary structure to be ready in time for the one-year anniversary of the earthquake. The temporary Cathedral will be built from 86 locally produced cardboard tubes, each of which has been specially treated to ensure it is both weather and fire-proof. Rising more than 78 feet into the shape of an A, the Cathedral will also incorporate a large stained glass window designed by a local artist. Despite being constructed from cardboard, the resulting structure will seat 7 people and will be used by a range of community and musical groups. Architect Ban is famous for his cardboard structures which have been used following both Japan’s 1995 and 211 earthquakes.