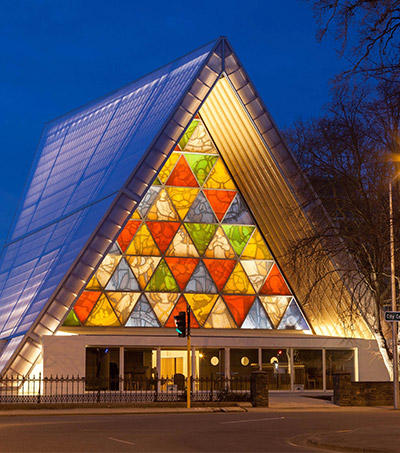 The story of Christchurch’s resurrection is nearly as inspirational as the one that lends the city its name. In the aftermath of a terrible succession of earthquakes between 2010-11, which led to the demolition of a third of the Central Business District’s buildings, the gateway to New Zealand’s South Island has successfully begun to reimagine itself. Indeed, just three years after the devastation, Christchurch ranked no. two on The New York Times’s much-watched “52 places to go” list in 2014.

On the fifth anniversary of the historic quakes, Financial Times architecture critic Edwin Heathcote explores a city in the process of reimagining itself. On his wide-ranging tour, Heathcote notes funky, makeshift solutions of a city clearly still in transition: “flashes of ‘guerilla’ regeneration” that include outdoor dance floors and mini gold courses, malls made from shipping containers, ad hoc memorials, and coffee bars buzzing with “steampunk ingenuity.”

Exemplifying the city’s No. 8 wire spirit is Japanese architect Shigeru Ban’s Christchurch Transitional Cathedral, affectionately known as “the cardboard cathedral.” The building, which has come to stand as the symbol for the city’s will to rebuild itself, is based on a design the architect devised to build shelters for victims of disasters using cardboard tubes, “the lightest, cheapest and most ubiquitously available material.” Though the stunning site looks like “a temple built from bits of Muji stationary,” don’t be fooled: Christchurch’s new building codes are among the world’s most rigorous, and the cardboard tubes cover steel beams and struts.

Heathcote’s survey also includes the city’s newly reopened art gallery—featuring Martin Creed’s neon credo “everything is going to be alright”—and former University of Canterbury’s high-Gothic campus, currently undergoing the nation’s largest heritage reconstruction. “It seems strange to encourage tourism to a city so shattered,” Heathcote writes. “Yet Christchurch is in the middle of reimagining itself, and a visit is an opportunity to witness the slow, sometimes uncertain, sometimes wrong and occasionally magical resurrection of an entire city.”