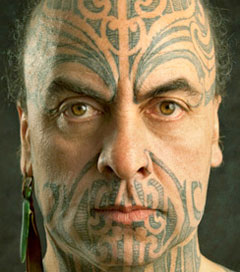 New Zealand sculptor George Nuku’s work is part of an exhibition called, Paradise Lost? Contemporary Works from the Pacific, on through 29 September at the Museum of Anthropology in Vancouver. The Vancouver Sun’s Shawn Connor talked to Nuku about the piece he created especially for the show, working with his favourite material, Plexiglas and similarities between First Nations’ and Maori art. Nuku is carving large Plexiglas vitrines, which will be placed in the Great Hall.

“I like [Plexiglas] because of the relationship it has inside the museum. Museums are the kinds of places that use a lot of it in displays; then after the exhibits they tend to get rid of them. I like the idea of using them again. [The sculpture] will be a company of monumental statements in a big cluster.” “What similarities are there between Maori and First Nations art?” Connor asks. “The environment is the same. It’s dominated by trees, so it’s coming from the same context, of the people being inseparable from the trees. It’s the same for Maori people in the use of woodcarving and building canoes and communal houses.

“What about creation myths? Are those similar?” “There are similar undercurrents, coming from the darkness into the light,” Nuku says. “Here there are superstars of the spirit world, like the raven. In Maori culture it’s the trickster. I have a tendency to channel all that when I’m carving the plexi – I’m doing some new tricks and giving them a new spin.” Nuku is from Omahu. He lives in Roeun, France.