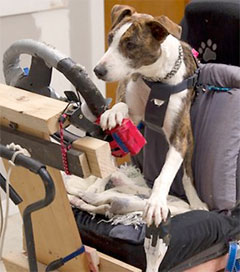 Canines Take To The Wheel

Dogs rescued by the SPCA are being taught to drive in a campaign to show how intelligent canines, and even those abandoned, really are. Astonishingly, it took three dogs just eight weeks to master the basics in wooden carts. They then graduated to a modified Mini in which they sat on their haunches in the driver’s seat with their paws on the steering wheel. Their feet go on extension levers, which are attached to the accelerator and the brake while their paw rests on the gearstick. SPCA Auckland chief executive Christine Kalin said: “I think sometimes people think because they’re getting an animal that’s been abandoned that somehow it’s a second-class animal.” “This really shows with the right environment just how much potential all dogs from the SPCA have as family pets.”