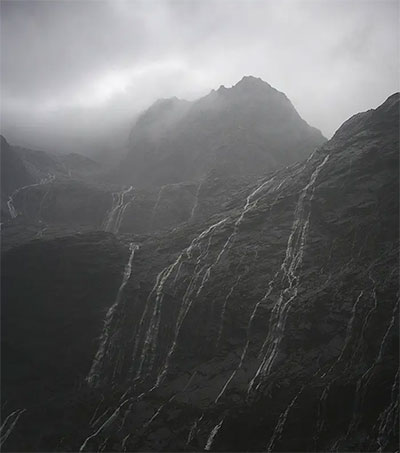 Over the past four decades, the Bristol-born photographer Jem Southam has been documenting the English landscape, but for his latest series, The Long White Cloud, the 69-year-old found himself thousands of miles away.

The work was made in New Zealand at the end of 2018 after he was invited to lecture in Wellington. With that came the invitation to make new pictures, which star in an exhibition on at London’s Huxley-Parlour gallery from 13 February until 9 March.

“I quickly realised that I would be a fool to try to do anything there in a similar vein to my British work,” Southam recalls. His cumbersome field camera left behind, he began experimenting with a completely different approach: switching to digital and photographing in portrait format. Travelling through the country, Southam found himself enjoying being a tourist, a visitor new to these landscapes, which offered such a departure from his usual method of working.

“Then one day, in Abel Tasman National Park,” he says, “we came across a large rock on a beach which had carved graffiti on it, with one word blazoned across the middle: restless. This gave me the working premise and a working title for the whole series. The restlessness of the human race, which for millennia has spread across the globe to occupy every possible inhabitable land, and our contemporary restlessness as we pour across the world in hordes, devouring spectacle after spectacle.”

Like the UK, New Zealand is an island nation and like much of Southam’s previous work, The Long White Cloud contains an abundance of water. “For reasons I have never fully understood, I always make work involving both land and water, studies of rivers, ponds, the coast and more recently rain,” he says.