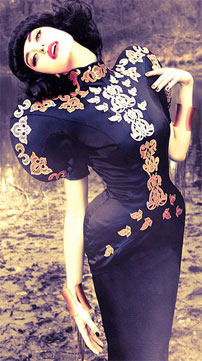 Big Name from a Small Place

“Growing up in a small country on the other side of the world, a young girl named Kimbra Lee Johnson did what she said almost every New Zealander does – dream big,” Michael Bialas writes in a profile of the singer for The Huffington Post. “Now, in the tradition of one-name wonders, Kimbra is living the dream of every pop diva as she tries to prove that her homeland offers more than grazing in the grass. ‘It’s good to submit that you don’t have to be from a big country to do big things,’ she says. She’s grateful for the break provided by her collaboration with Gotye, the Australian by way of Belgium whose song went to No. 1 in 11 countries around the world. Kimbra and Gotye just happen[ed] to be on the same bill 12 October at the Verizon Theater in Grand Prairie, Dallas.”
(10 October 2012)