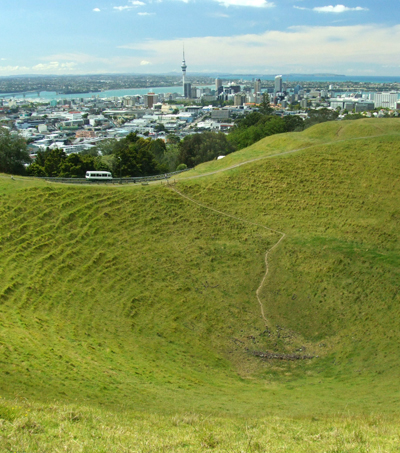 “Sprawling between both coasts of the North Island, New Zealand’s largest city is known as the “city of sails” for the yachts that occupy its harbors. But Auckland could just as easily be dubbed the “city of lava” for the approximately 50 volcanoes dotted around its landscape,” writes Susannah Cullinane for CNN. In her article she provides some “volcanic starting points for exploring the city and its landscape”.

Auckland’s landmark volcano Rangitoto can “be seen rising out of the waters of the Hauraki Gulf from many of the city’s vantage points”. There are plenty of walks on the island and visitors “can clamber up lava fields and through the world’s largest Pohutukawa forest to reach the 259-meter-high (850 feet) crater”. “Rangitoto is also New Zealand’s youngest volcano and Auckland’s most active, last erupting only 600 years ago,” as reported in the article.

In the North Shore suburb of Devonport “visitors can explore military installations and tunnels on the historical reserve” at North Head. “On the northern side of North Head you can stroll along the golden sands of languid Cheltenham Beach, where Rangitoto provides a picture-perfect backdrop for swimmers.” “Alternatively, you can turn from North Head towards Mount Victoria and wander through Devonport village, which lies between the two,” writes Cullinane.

Atop the Pukekawa volcanic cone sits the Auckland War Memorial Museum. From here it’s an easy stroll to the boutiques and galleries of Parnell or a short bus-ride to the Newmarket shopping district or central city.

“Maungakiekie, or One Tree Hill, is the largest volcanic cone on Auckland’s mainland by area and historic site of a large Maori pa, extensive terracing from which is still visible.” Most visible from around the city is the obelisk with a bronze figure of a Maori warrior at its base – a monument that “was erected in the 1940s to pay tribute to the Maori people, at the bequest of prominent English settler Sir John Logan Campbell.”

“Maungawhau, or Mount Eden, is Auckland’s highest natural point. From the summit you can stare down into its steep 50-meter-deep crater or get a 360-degree view of the city’s sprawling suburbs.”

“Further out of the central city and handy to the airport, Mangere Mountain is some 30,000 years old. Standing at 106 meters, it has three craters and the Auckland volcanic field’s only “tholoid” — a lava plug that forms a dome in the middle of one of its craters,” as reported in the article.