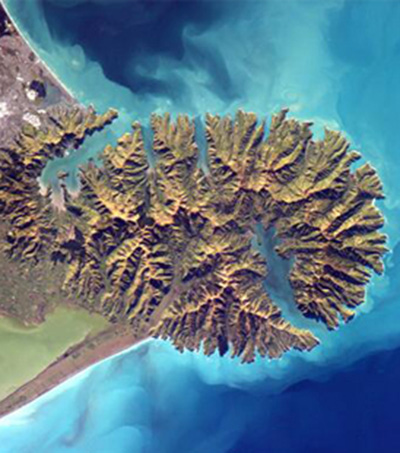 A German astronaut has tweeted a stunning picture of Banks Peninsula from space.

Dr Alexander Gerst, who has a Masters in Earth sciences from Victoria University, is traveling aboard the International Space Station.

“Nice view of Banks Peninsula in #NewZealand. Magnificent scenery, used to hike there often…,” he tweeted.

The flight was launched last month from Kazakhstan and will return to Earth in November after a number of experiments have been carried out.

Dr Gerst, who studied under Victoria University geophysics professor Martha Savage several years ago, asked her to contribute an item to take on the journey. She gave him a piece of pumice that originated during the Taupo eruption almost 1800 years ago.

The rectangular piece of pumice measures 2.5cm and weighs just over 14g.

“I chose it because it’s lightweight and small, and beautifully represents the University and the highly regarded earth sciences programme we run here, which Dr Gerst was part of for a time,” Professor Savage said.

She said being able to provide an item for the flight provided an exciting opportunity for Victoria University to be part of Dr Gerst’s first-ever space exploration.

After completing his Master’s degree at Victoria, Dr Gerst gained a PhD in volcanology from the University of Hamburg in Germany before joining the European Space Agency to train as an astronaut.