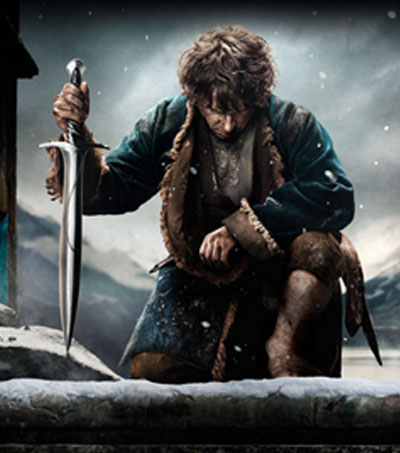 “The pleasure is intense, and mixed with awe,” writes Wall Street Journal film critic Joe Morgenstern of The Hobbit: The Battle of the Five Armies. “There is majesty here, and not just because we’re in the presence of magnificently regal madness… The awe begins when the movie begins, with the shock of seeing the dragon Smaug soaring over Lake-town like a jumbo jet, then laying waste to whole neighborhoods with a breath as deadly as napalm.

“Much of “The Battle of the Five Armies,” like the films that preceded it, could qualify as an animated feature, but that magnifies the awe, rather than diminishes it as in the case of so many middling attractions that depend on mediocre technology. The computer-generated effects here are executed so gorgeously—my favorite is a battle on the ice—and intertwined with such stirring live action, that the film as a whole is seamless, quite astonishing and deeply satisfying.

“One of the signal achievements of Mr. Jackson and his myriad colleagues in this film is maintaining not only a sense of momentousness but of individual purpose, crisis and tragedy. Martin Freeman’s Bilbo Baggins, touching as ever, is an observer of Thorin’s madness, up to a point; when he finally intercedes, it’s with courage and thrilling clarity. Other stalwarts of the series are present and vividly accounted for: Ian McKellen’s Gandalf; Cate Blanchett’s Galadriel, Orlando Bloom’s Legolas, Evangeline Lilly’s Tauriel and, especially moving for devotees of genre films, Christopher Lee’s Saruman. The six films in Mr. Jackson’s two trilogies have come to constitute a genre unto itself—peerless fantasy, flawlessly rendered.”

Tags: Peter Jackson  The Hobbit  The Hobbit: The Battle of the Five Armies  Wall Street Journal (The)