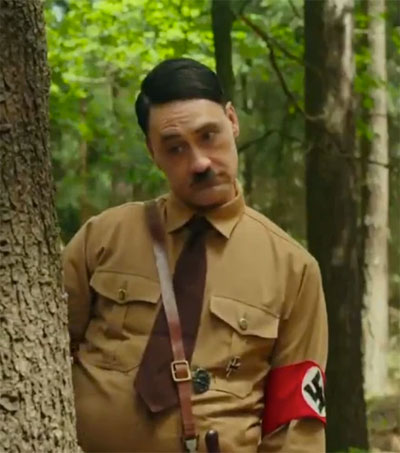 The trailer for Jojo Rabbit launched as the film was announced as a headliner for the 2019 Toronto International Film Festival in September, Convery reports.

While the snippets showing the actor in Hitler costume may be startling in isolation, the film’s darkly comedic tone is drawn from the novel on which it is based: Caging Skies, by the New Zealand-Belgian author Christine Leunens. The story follows a young German boy during World War 2 who embraces Nazi ideology, only to learn that his parents are hiding a Jewish girl in the walls of their house.

The trailer gives little of the plot away, but shows Jojo being bullied at what looks like a summer camp for Hitler Youth, before confiding in his imaginary friend, a rather paunchy and particularly un-self-aware Hitler, who pops out from behind a tree.

“They called me a scared rabbit,” Jojo says.

“Let them say whatever they want,” Waititi’s Hitler replies. “People used to say a lot of nasty things about me. ‘Oh this guy’s a lunatic. Oh look at that psycho, he’s gonna get us all killed.’”

Waititi, who is known for bringing comedy with depth to difficult subjects, confirmed last week that he would return to the apparently infinite Marvel Cinematic Universe to direct the fourth Thor film, and his second.

Jojo Rabbit is due for general release on 18 October.