NZEDGE  >  News  >  Sport  >  Another Win for Smith Ahead of London Marathon 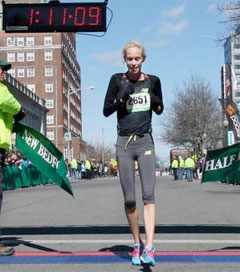 Another Win for Smith Ahead of London Marathon

New Zealander Kim Smith, 32, has won the 37th New Bedford Half Marathon, her third victory in as many tries. Smith won the same race in 2011 and 2010.

Smith, the three-time winner of what functions as the second of seven USATF-NE Grand Prix Series races, now has bigger fish to fry.

Smith has been a marathoner since 2002 but prefers the half marathon.

“The half marathon is probably my best distance,” she said. “My PR is 67 minutes.”

“You can do more of them and it’s just a lot less taxing to do a half marathon than a marathon.”