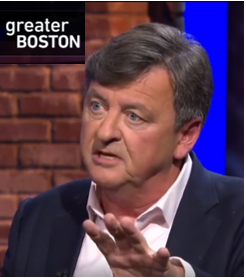 Braude introduced the segment by saying the four day week is an idea that he himself has been “obsessing over for decades”, and says that while he and Barnes have similar goals “I talk a good game, you actually did it!”

In a wide-ranging 8-minute interview, Barnes said the switch would be beneficial not only for employees’ health and well-being, but also for employers’ bottom lines – hence the subtitle of the book How The Flexible Work Revolution Can Increase Productivity, Profitability, And Well-Being — And Create A Sustainable Future.

When asked by Braude to predict where we will be in 10 or 20 years’ time, Barnes simply says:

You can watch the full interview here.

Following his book launch at New York’s famous Strand Bookstore on Broadway and 12th, Andrew Barnes was also interviewed by The Wall Street Journal, the Boston Globe, Fast Company and several management and HR journals. He lectured the NYU MBA programme at Georgetown University in D.C., was hosted at Harvard University, attended the U.S. Chamber of Commerce’s 2020 State of American Business speech and spoke with policy experts at the Chamber.

The 4-Day Week has also been launched in New Zealand, Australia and the UK.