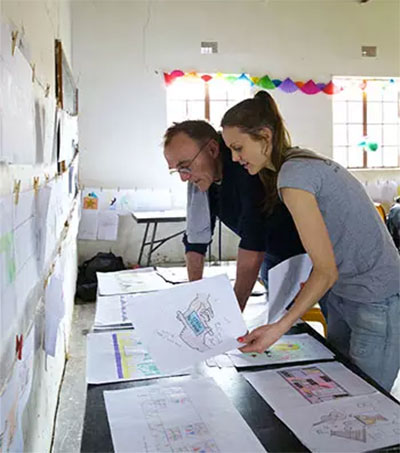 New Zealand-born Amber Sainsbury is founder and CEO of UK-based creative arts charity Dramatic Need, for which Oscar-winning film director Danny Boyle has served as a trustee since 2007. The charity’s South African flagship, Piet Patsa Community Arts Centre, is in the market for some new decor and the best drawings, as picked by the world-famous director, will soon constitute a giant, wraparound mural.

Since the mid-oughts, Dramatic Need has, among other things, served as something of a reset button for Boyle’s agile mind. This trip to South Africa has a specific goal: he will listen to personal monologues written by local children, and help choose a selection to be adapted by leading playwrights and performed in New York.

According to their press material, the charity’s mandate is to use art and drama to help “vulnerable children regain hope and self-belief in the face of conflict, trauma and hardship”. About 5500 kids have passed through their programmes in South Africa and Rwanda – not a huge number, but nonetheless significant given the lack of extracurricular (or even curricular) activity in many of their communities.

Every kid in the remote community of Rammulotsi has a story, many of them nightmarish, and Dramatic Need’s core belief is that by sharing these stories, healing can begin. Children in the drama programmes craft monologues from the raw material of their experiences. As a means of fundraising, Sainsbury, a former actor, leans on her industry connections to massage the monologues into honed pieces of dramaturgy.

Playwrights and screenwriters including Tom Stoppard, Lynn Nottage and Neil LaBute have all obliged in the past, and their interpretations have been performed on stage by actors for whom Oscar nominations are commonplace. Not just any stage, mind you: The Children’s Monologues was first produced at the Old Vic in 2010, and then again at the Royal Court in 2015. (There were simultaneous performances by the children in Rammulotsi, and by local actors in Johannesburg.) This year’s event, scheduled for November, will raise funds both for Dramatic Need and for the production’s New York venue, Carnegie Hall. Charlize Theron, Trevor Noah, Susan Sarandon, Daniel Kaluuya and Ewan McGregor, to name a few, are currently attached to star.

Boyle’s job is to serve as the in-house directorial talent. “Amber got in touch wanting to get this up,” he says. “I liked her, it sounded interesting and I wanted to support her. But it is a chain of belief with stuff like this. It’s like the film work – it starts with an idea, and then you have to start evangelising, bringing others on. Because it’s so easy to be cynical.”

Sainsbury trained as an actress at the Webber Douglas Academy of Dramatic Arts in London. She founded Dramatic Need in 2007 and continues to run the charity on a day-to-day basis.

The Children’s Monologues, directed by Boyle, is at New York’s Carnegie Hall on 13 November.