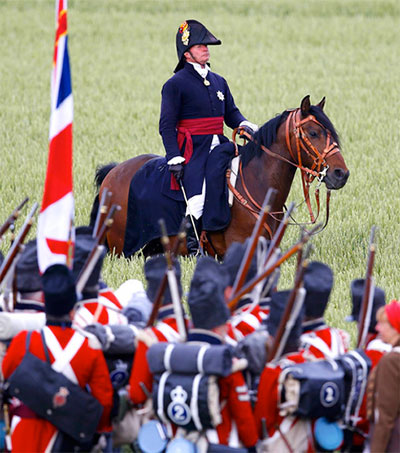 Alan Larsen Is the Duke of Wellington at Re-enactment

The most important man in the Allied camp at the re-enactment of Napolean’s defeat at Waterloo was 55-year-old New Zealander Alan Larsen, known as the Duke of Wellington.

Larsen, a historical events coordinator, can be seen at times striding across the field to upbraid lower ranks if they are not dressed properly, although he admits his role is somewhat less strategic than the man he is impersonating.

“My role in the battle is to stay on top of my horse, wave my hat and point in the appropriate direction at the appropriate time and generally to bring an air of confidence to the British Army,” Larsen says.

More than 64,000 spectators gathered at the battlefield for the dramatic re-enactments, the climax to days of commemorations. In front of them more than 5000 male and female re-enactors re-created the 10-hour battle that two centuries earlier had left more than 65,000 dead and wounded.

Although Larsen has been involved with re-enacting for 37 years, he claims not to take it too seriously. “It’s an acting role pure and simple and when I leave here it’s back to being Alan Larsen of Bolsover.”

Larsen has played many roles, including that of William the Conqueror during the re-enactment of the Battle of Hastings (1066) in 2012, where he commanded more than 100 Norman cavalrymen on the original battlefield.

This re-enactment took place on the 200th anniversary of the Battle of Waterloo. The re-enactments have been some of the largest ever staged.