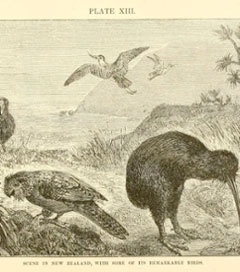 “No country on the globe can offer such an extraordinary set of birds as are here depicted,” wrote British naturalist Alfred Russel Wallace of “the peculiar Ornithology of New Zealand” in The Geographical Distribution of Animals, published in 1876.

For this publication, he teamed up with Johann Baptist Zwecker, a German-born artist with a “talent as a zoological draughtsman”.

In this image (Plate XIII in volume 1), Wallace has brought together some of New Zealand’s most celebrated avifauna. The star of the show is the kiwi, which Wallace describes as “one of the queerest and most unbird-like of living birds.” To its left is a kakapo, “a nocturnal burrowing parrot … that climbs but does not fly”. On the wing, a pair of wrybill, “remarkable for being the only birds known to have a bill bent sideways.”