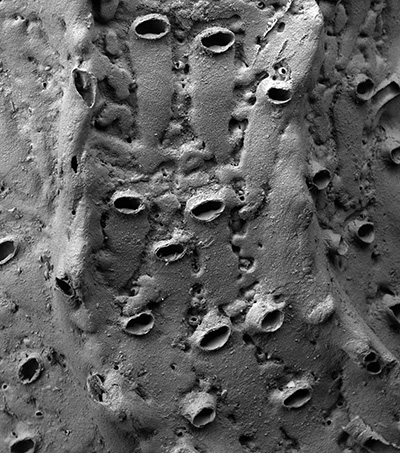 A sea animal thought extinct for four million years has been rediscovered in, of all places, Picton, New Zealand. Previously unknown outside of Europe and the Middle East, fossilised remains of the sea animal known as Protulophila were first found near Wanganui in geologically young rocks (less than a million years old).

This raised the possibility that the creature might still exist, sending scientists scrambling to examine the Invertebrate Collection held by NIWA (National Institute of Water and Atmospheric Research). There they found examples of preserved tubeworms, collected in 20 metres of water near Picton in 2008, upon which were the previously ignored Protuphilia living on the worms.

Protulophila is an organism that forms a network of tiny holes in the chalky tubes of marine worms called serpulids. It is a colonial hydroid related to corals and sea anemones and best examined through a microscope.

Its genealogy stretches back 170 million years to the Middle Jurassic period in Europe but the fossil record suggested its extinction four million years ago.

“Finding living Protulophila is a rare example of how knowledge of fossils has led to the discovery of living biodiversity,” says NIWA marine biologist, Dr Dennis Gordon, who shares the distinction of finding the animal with scientists from the Natural History Museum in London and the University of Oslo.

“It’s very exciting,” Dr Gordon continues. “Our detective work has also suggested the possibility that Protulophilia may be the missing polyp stage of a hydroid in which only the tiny planktonic jellyfish stage is known.”

Hydroid species have a two-stage development and often the two stages of life are never matched: “Our discovery may thus mean that we are solving two puzzles at once,” says Dr Gordon.