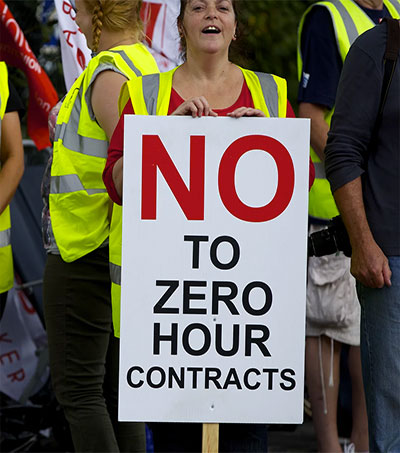 Zero-hour contracts have been outlawed in New Zealand after parliament unanimously passed a bill to ban the controversial practice, which is being hailed as a major victory for minimum wage workers, particularly in the fast-food industry, the Guardian reports.

Mike Treen, leader of the Unite union, who led the charge, said the move was being closely followed by fast-food workers worldwide, many of whom banded behind the New Zealand workers campaign last year.

“This is an incredible victory and I am still shocked by it to be honest – the fact that the ban was unanimously supported in parliament is pretty unbelievable,” Treen said.

Treen estimates there are “hundreds of thousands of workers” employed on zero-hour contracts in New Zealand, which means employers do not have to guarantee minimum hours of work per week, and often expect employees to be available 24/7.

The contracts have also caused controversy in the UK where the country’s biggest sports retailer, Sports Direct, has 15,000 employees on zero-hour deals.

In New Zealand they are typically used by fast-food chains, as well as by cinema groups, security firms and cleaning companies, Treen said.

The bill, which will take effect on 1 April, stipulates that employers must guarantee a minimum number of hours work each week, and workers can refuse extra hours without repercussions.