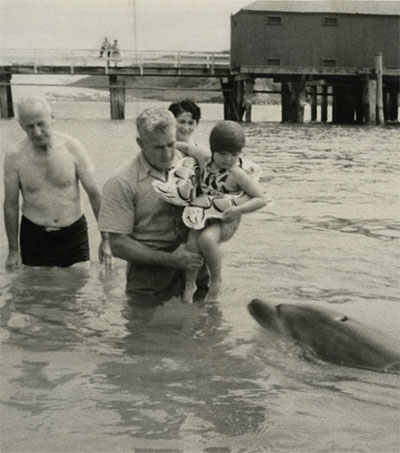 You Never Saw a Dolphin That Looked so Cute

During the summer of 1955-56, the Northland township of Opononi attracted thousands of visitors from across the country. They came because they wanted to catch a glimpse of a visitor who’d appeared on the beach: a playful dolphin who came to be known as Opo, Eric Grundhauser writes for travel site Atlas Obscura.

“The dolphin eventually started following familiar boats as they returned home, drawing her closer to shore, and soon she was interacting with local beach-goers almost daily,” Grundhauser writes. “At first the locals gave her the nickname “Opononi Jack,” as a reference to another famous New Zealand dolphin, Pelorus Jack, who’d became famous around the turn-of-the-century for supposedly guiding boats through the treacherous waters of the Cook Strait. However, since the Opononi visitor was female, the nickname eventually got truncated down to Opo.

“During the months that Opo was a recurring attraction at Opononi beach, she never bit or otherwise injured anyone – no small feat considering the pokes, prods, and manhandling she no doubt endured. Stories of Opo hit the national newspapers and beyond, attracting thousands of curious visitors to the tiny town. The nearby roads were often crammed with cars stuck in traffic trying to get to the beach. By the beginning of 1956, Opo fever was in full swing.

“Eventually, locals began taking measures to try to keep her safe. The Opononi Gay Dolphin Protection Committee organised the installation of a sign that read, ‘Don’t Try to Shoot Our Gay Dolphin.’

“In early 1956, the Protection Committee successfully lobbied the government council to create a new law protecting dolphins in the Hokianga Harbour. This new regulation, which made it illegal to ‘take or molest’ dolphins in the harbour, carried a fine of £50, and went into effect at midnight on 8 March. On 9 March, Opo was found dead among some sharp rocks.

“The exact cause of Opo’s death quickly became a matter of debate. Some suggested that she had become confused while hunting some fish and ended up among the sharp rocks, while another popular theory was that she had been scared into the rocks by some fishermen using explosives.

“People throughout the country observed the beloved dolphin’s passing. In Opononi, businesses were shuttered for a day of mourning. A hockey team on the other side of the island wore black armbands during one of its games. Letters and condolences poured into the town from across the country. Opo was ceremoniously buried in a flower-covered grave next to the local veterans’ hall.

“While Opo did not live to see the law or legacy she inspired, the gay dolphin is still well-remembered among New Zealanders. There is a stone monument to Opo in Opononi, and her story has been immortalised in songs and children’s books.”