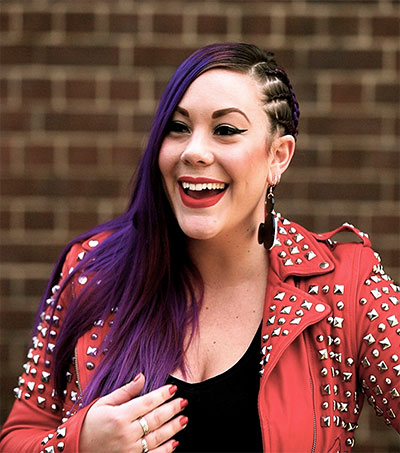 New Zealand-born journalist and author Maria Lewis has morphed from a crime reporter on the Gold Coast to pop-culture extraordinaire, has nabbed an international publishing deal and caught Quentin Tarantino’s attention, all by the age of 27.

After suffering a transient ischemic attack, known as a TIA or mini-stroke, when she was 22, Sydney-based Lewis became an ambassador for the National Stroke Foundation. The illness also changed her world-view.

No more would she put off what could be done. And so Tommi Grayson and all the other characters that make up Who’s Afraid, her debut novel, found themselves fully formed and shopped around to publishers, with UK publisher’s Little Brown Books wanting not just the first story, but also the next.

Now, in between getting the next Tommi Grayson adventure ready for its January 2017 release (tentatively titled Who’s Afraid Too), Lewis is travelling the world talking not just werewolves and rainbow hair, but strong female characters, a subject close to her heart – and the need to look deeper, to question and to battle, and not just in fiction.

“Strong female characters don’t need to be defined by their physical strength and we don’t need to justify them by their masculine traits,” she said from Contact2016, the 55th Australian Speculative Fiction Convention, held in Brisbane recently.

Lewis’ debut novel become the number one trending topic on Twitter on the day it was launched, outpolling Tarantino’s latest film offering, The Hateful Eight, which was premiered in Australia on the same day. Tarantino requested a signed copy who had out-manoeuvred him in the publicity stakes.

Up next is the UK launch of her book and a European book tour, while planning a wedding, putting the final touches on the Who’s Afraid sequel and fitting in her day job at broadcaster SBS, with appearances at pop culture expo Supanova in between.