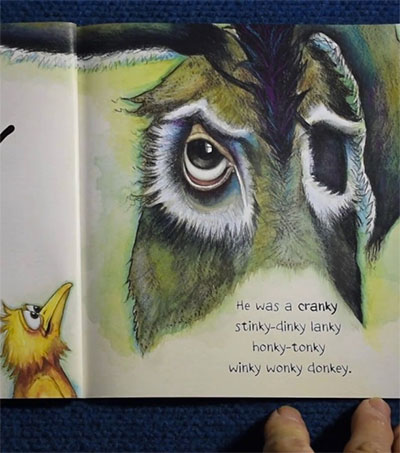 The tale of a three-legged donkey has become a surprise Christmas bestseller thanks to a viral video of a grandmother reading it to her grandson. The Wonky Donkey, written by New Zealander Craig Smith, is the first book for preschoolers to make the top 10 Christmas chart since records began 25 years ago, according to figures compiled by Nielsen BookScan. Britain’s Telegraph reports.

The Wonky Donkey had been selling steadily in the Southern Hemisphere since its release in 2009. But it became a sensation in the UK after Janice Clark, a Scottish grandmother now living in Australia, was filmed reading it to four-month-old Archer.

She could not get through the rhyming story without dissolving in fits of giggles and the video, posted in August, has been viewed millions of times on YouTube and Facebook.

Clark now has her own YouTube channel reading stories to Archer, and Smith is celebrating a remarkable sales boost. It sold 29,312 copies in the seven days leading up to 15 December, the week traditionally used to measure Christmas best-seller figures, making it the seventh most popular book in the list.

The biggest-seller was Michelle Obama’s Becoming, knocking David Walliams off the top spot for the first time in three years.

Heather Morris, another New Zealander, also featured on the bestseller list with her novel, The Tattooist of Auschwitz which sold 33,881 copies.