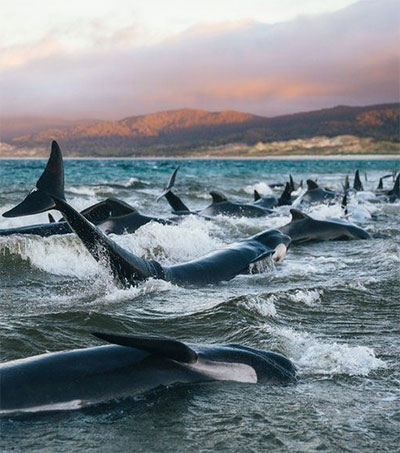 Why Are Whales Stranding in New Zealand?

While whale strandings are not uncommon, they usually involve just a single animal rather than a whole group. The recent flurry of mass strandings on New Zealand beaches has brought a renewed focus on the mysterious, and rare, phenomenon, which is because of a variety of factors.

“Quite often animals that turn up on a beach are getting exhausted, they’re malnourished, or they haven’t eaten because they’re ill,” says Dr Simon Ingram, a Professor of Marine Conservation at the University of Plymouth.

“They can be in the final stages of being ill or die at sea and end up getting washed up on a beach,” Ingram adds.

Some experts say that certain aspects of the coastline or sea bed can disorientate whales, especially if they roam outside of their usual habitat.

“Some places like the tip of New Zealand are hotspots for stranding,” Ingram says.

“Sometimes this is due to geographic features of the coastline. If there’s a feature like a peninsular or headland then animals that should be in deeper [waters] may suddenly find themselves in a confusing, shallow bay.”

But if a single whale gets injured or lost, why do they end up beached in such large numbers? Experts say the answer lies in their herd-like behaviour.

“It’s a problem you get with these very social animals that tend to, for reasons we have never been clear on, end up following either a sick leader onto the beach or end up getting lost as a group,” says Dr Andrew Brownlow, a veterinary pathologist who has undertaken post-mortems on stranded pilot whales in Scotland.