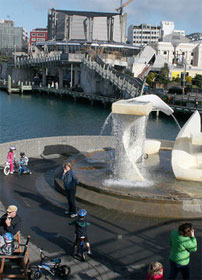 “Once a flyover city for tourists as they jetted between the thermal regions of the north and the cloud-scraping mountains of the south, or at best a pass-through destination for those taking the ferry across the Cook Strait to the South Island, Wellington has become a tourist draw in its own right,” The New York Times’ Ethan Todras-Whitehill describes. “It is already the country’s cultural hub, with excellent museums, a thriving music scene and more bars, cafes and restaurants per capita than New York City, yet with so much green space and water that nature is always nearby. “[At] Mighty Mighty, where the band was playing psychobilly rock, we perused the drinks menu, which was hidden in a vintage record sleeve, and observed the wildly decked-out patrons, some dressed in afro wigs and others in lederhosen. My wife and I looked at each other, and then at our impromptu guides, their point well and truly made: Wellington is cool. We get it now.”