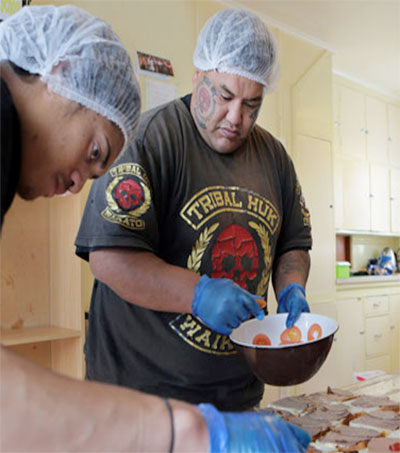 Ngaruawahia gang Tribal Huks has been making approximately 500 sandwiches daily and dropping them off at 25 local Waikato schools, just as American gangs have responded similarly in the past, according to a Christian Science Monitor report.

In what some may view as an inadvertent act of parent shaming, gang members have stepped in to make sandwiches for hungry school children whose parents have failed to provide them with lunch.

According to Stuff website, Tribal Huk gang is made up of young men who grew up as hungry kids and turned into angry men. Jamie Pink, Tribal Huk leader said, “All the violence aside, this is more important.”

Now, the community has offered resources to the gang members, pledging to help grow the school-lunch project as well as gardens of vegetables and provide honey, avocados, margarine, eggs, books, and money.

Pink, 43, was fed by gang members when he was young and remembers them as generous people who looked after him when his mother had nothing.

Warren Stewart, of Virginia in the US finds the New Zealand gang response credible – and familiar.

A former school superintendent, Stewart says that he was raised in poverty and became a member of the “Aces” gang during the 1950s.

Despite bitter rivalry, he and opposing gang members “The Snakes” often did something similar to what the Tribal Huks are doing today in New Zealand by bringing food to impoverished children in their respective areas.

“Giving in this way by people considered to be outlaws harkens back to Robin Hood. Giving to needy children crosses all barriers,” Stewart explains. “Rich, poor, good or perceived as evil, everyone gets a lift from giving that makes them feel good.”