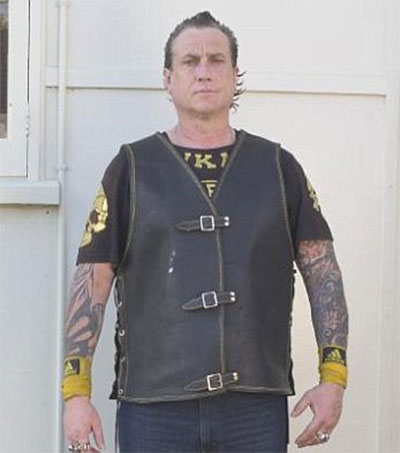 The ominous deadline set by the Tribal Huks gang for methamphetamine dealers to leave Ngaruawahia has expired and it showed with the streets left empty last week. Tattooed members of the notorious gang wearing their trademark yellow and black patch with a skull on the back, made their presence felt on the streets and it resulted in a quiet night in town.

Gang leader Jamie Pink, who was arrested in 2007 for smashing up an ice dealer’s pad with a sledgehammer after it was alleged he offered the drug to Pink’s then 13-year-old daughter, said dealers would get “a visit” if they hadn’t cleared out of Ngaruawahia by 6.30pm.

The ultimatum alarmed Western Waikato Police, who said in a statement to Daily Mail Australia they don’t condone threats of violence or intimidation. But the comments have found sympathy with some members of the Ngaruawahia community, who are worried crime is increasing, Fairfax NZ reported.

The Tribal Huks claim to have roots as far back as the late 1950s, but they’ve grown in size and stature over the past couple of decades, according to Gilbert.

“Where they are somewhat unusual is that a lot of the independent groups during the 1970s and 1980s were absorbed into the much larger gangs – notably the Mongrel Mob and Black Power,” he said. “Those two groups spread like wildfire throughout New Zealand and when one formed in an area, the other tended to form almost as a counterbalance.”

“In the heart of Mongrel Mob territory that’s no mean feat.”

A former gang member, who did not want to be named, told the New Zealand Herald the gang formed in the 1970s to protect themselves and Ngaruawahia from bigger gangs that passed through town and caused trouble at one of the local pubs.

Dubbed the “sandwich gang” by local media, they gained international attention in late 2014 for making lunches for needy schoolchildren.

“We’re not exactly the pillars of society, we understand that … we’re doing something good, and that’s true. No matter what people say, you can’t take that away,” Pink said.

Gilbert said Pink and the Tribal Huks proved that not all gangs are “bad to the bone”.

“In reality the scene has always been much more nuanced about that,” he said. “It’s never been about just crime. You don’t join a gang to engage in organised criminal activity, you join a gang for reasons of brotherhood, a sense of belonging, you join for a sense of status.”