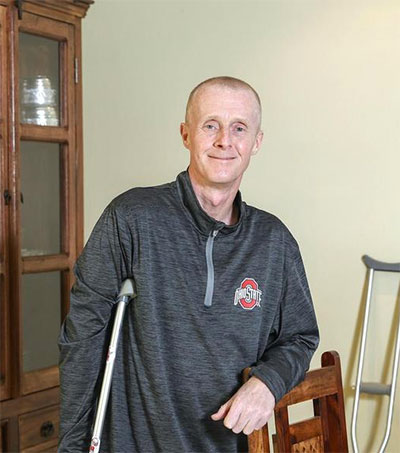 UAE-Based Professor Nick Ashill Back on His Feet

The 52-year-old was hoping to spread the word of pulmonary fibrosis, a disease that took his mother in 2015 and is thought to be one of the many respiratory conditions that affect 40 million people in the MENA region, many of whom are under 40.

Ashill, who is an expert in luxury brand management and professor at AUS, was hoping to run the route in 108 days, hitting 50km a day before being reunited with his wife and children in Central Park, New York.

On 2 August, life took a twist for the father of four as he was struck by a car and left for dead on a US highway.

Doctors rebuilt his pelvis, and were pumping blood back into his body three days after the accident.

Despite struggling to walk the short distance from home to the university campus, Ashill is determined to get back to doing what he loves – teaching.

He was professor at Victoria University in Wellington, where he met Sarah. They made a decision in 2007 to move overseas so he took a job offer at the AUS in 2008.

“It was supposed to be for two years, but I’m still here ten years later,” Ashill says.

“AUS is one of the top universities in the Middle East and they were very supportive of me when I said I wanted to run across America.

“It’s only in the last ten years or so I’ve taken on ultra-running.”

Ashill ran the Marathon de Sables in the Sahara Desert and the Comrades ultra-marathon in South Africa.