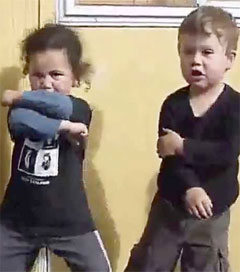 Tiny Troop of Toddlers Performs the Cutest Haka Ever

Six Ngati Toa children with an average age of two, from Porirua’s Bronwyn’s Place Daycare, have performed what news outlets are calling “the cutest Haka ever”. “It is one of the most awesome sights in rugby – the New Zealand All Blacks ‘Haka’ war dance, performed at the start of a match to instill fear into the hearts of their opponents,” the Daily Mail reports. “But now a tiny troop of adorable toddlers have been filmed performing their own version of the haka with hilarious results. The iconic ritual, officially entitled ‘Ka Mate’, is usually seen performed by the All Blacks before Test Matches, a tradition they have kept since 1905.” At last count the YouTube video had 60,583 views.