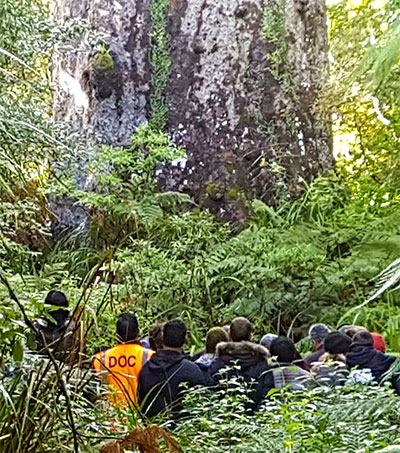 Time May Be Running Out for Tāne Mahuta

New Zealand’s oldest and most sacred tree, Tāne Mahuta (Lord of the Forest), stands 60m from death, as a fungal disease known as kauri dieback spreads unabated across the country. Despite stringent efforts by local iwi to combat the spread, there is no cure, and native tree experts are calling for international help to slow the demise of the disease and save Tāne Mahuta.

Kauri dieback – spread commonly through infected soil tramped in on walkers’ boots, or the hooves of wild pigs – causes most infected trees to die, and is threatening to completely wipe out New Zealand’s most treasured native tree species, prized for its beauty, strength and use in boats, carvings and buildings.

Amanda Black from the Bioprotection Research Centre at Lincoln University, estimates Tāne has only three to six months before becoming infected – if he is not already – as his mammoth root system spreads in excess of 60m underground.

Black was recently invited to attend a hikoi for Tāne in Waipoua Forest, held by the local tribe, Te Roroa, who prayed for the tree’s safety and wellbeing as the disease inches ever close.

“We don’t have any time to do the usual scientific trials anymore, we just have to start responding immediately in any way possible; it is not ideal but we have kind of run out of time,” Black says, adding that although there is no cure for kauri dieback there is a range of measures which could slow its progress.

“Tāne is the nearest thing to a sentient being that we can measure time by. For Māori in particular, it is their ancestor. For them to lose trees like that is equivalent to losing family members,” she says.

Taoho Patuawa, a spokesperson for Te Roroa, says solutions being discussed include closing the entire forest and felling nearby infected trees.

“Closure is the best thing we’ve got, especially if the authorities got behind it and enforced it. The forest needs to rest,” Black says.