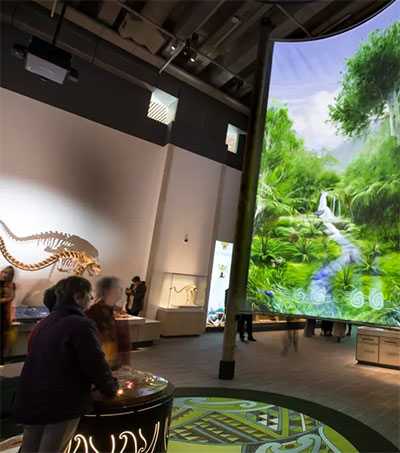 Dunedin-based Guardian journalist Eleanor Ainge Roy writes on Te Papa’s biggest development since its inception 21 years ago, the result of the largest ever investment in a museum exhibition in the country.

A 700-year-old fractured moa egg sits at the heart of the exhibition, cocooned in a 70-square-metre, four-metre-high bird’s nest woven from recycled materials. Inside, the songs of native birds extinct and threatened surround you, some now calling from the grave.

It is hoped the bird’s nest will inspire New Zealanders to tap into their role as kaitiaki of the land, and motivate them to step up to protect their homeland at a time of unprecedented environmental threats and bio-diversity decline.

Completely dual lingual, the exhibition weaves Indigenous knowledge and western scientific discoveries seamlessly, giving neither the upper hand, but presenting them as complementary to a robust and deep understanding of the country’s unique natural environment, which evolved in isolation over millions of years.

At a time when museums around the world are struggling with how to become more diverse and inclusive, Te Papa is leading the way in its symbiotic relationship with Māori. Biculturalism isn’t an afterthought at Te Papa – it’s the institution’s lifeblood.

Where the Southern Alps meet the sea on the west coast of New Zealand’s rugged South Island, Hinerangi Barr and her whanau hold a tribal story like no other: the landing place where Maui, hero of the Pacific, took his first steps on Aotearoa.

It is not a well-known story, even to New Zealanders, but it’s sacred to this small sub-tribe of Ngāi Tahu, Kāti Māhaki. Two years ago, a large contingent of the creative team of Te Papa ventured 700km south to sleep on the floor of the tribal marae and record the story of Maui’s landing for an audience that will eventually number in the millions.

“I think the Māori world view and the scientific world view interact with a lot of respect here,” says Barr, who considers Aoraki Mt Cook an ancestor, the roaring west coast rivers as whanau, and the rainforests of South Westland as living, breathing relatives.

Of the 1200 collection items on display the oldest specimen dates back 140m years; a giant ammonite, a shelled relative of the squid. For Brad Haami, the mātauranga Māori adviser, working on the exhibition over the last two years has unearthed Indigenous knowledge that might otherwise have been lost.

“Humanity is the youngest of the entities of the natural world. The plants and animals are the elders and it’s our role to learn from them, and care for them,” says Haami, who, like 70 per cent of Māori people, is a city-dweller.