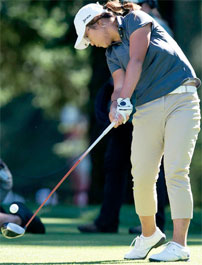 Talent Gets On With It

“The golf prodigy Lydia Ko was asked how she would cope with being the youngest competitor this week at the Women’s British Open, which was like asking Sean Lennon how he deals with being the son of a Beatle,” Karen Crouse writes for The New York Times. “The 15-year-old Ko knows no different. The success of the South Korean-born Ko has elevated her stature in her adopted country of New Zealand and made her a symbol for Kiwis everywhere. ‘For a few tournaments I’ve been the youngest competitor and I’ve coped,’ said Ko. ‘I don’t really think about my age or what I’ve done really. I’m just one of the 156 players that are here.’ Those eager to profit off Ko in the future have begun circling. In Canada, a professional caddie approached her mother and offered to carry Ko’s bag for free ‘wherever in the world she’s playing,’ mother Tina Ko recalled with a laugh.”