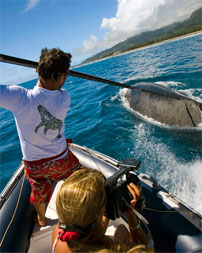 Swimming By the Stars

An eight-year University of Canterbury-led study that tracked humpback whale migrations by satellite shows the huge mammals follow uncannily straight paths for weeks at a time. Humpbacks use a combination of the sun’s position, Earth’s magnetism and even star maps to guide their journeys. Research leaders Travis Horton and Richard Holdaway of the University of Canterbury, confirmed the whales can travel in straight lines for thousands of kilometres despite strong sea currents. “One whale, moving southeast from Brazil towards the South Sandwich Islands, swam over 22km during a 28-day period along a heading that varied by less than half a degree,” Horton said. The team published their findings this month in the Royal Society journal Biology Letters.