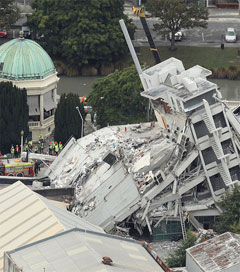 After the deadly Christchurch 6.3 magnitude earthquake, city officials responded with the most sweeping seismic review of concrete buildings ever attempted, far surpassing anything achieved in California.

Post-earthquake, residents were stunned to learn that two-thirds of the 185 people killed in the city in 2011 were in two modern, seemingly solid concrete office buildings that fell down with the shaking. One of the buildings, built in the 1980s, housed a local television station; the other (pictured), built in the 1960s, was filled with financial firms.

Authorities tentatively identified 342 buildings that required further review to determine if they needed to be retrofitted or demolished.

Officials are drafting sweeping legislation that would require multiunit, multistory apartments and all commercial buildings to be seismically evaluated within five years. If serious problems are found, owners would have 15 years to retrofit.