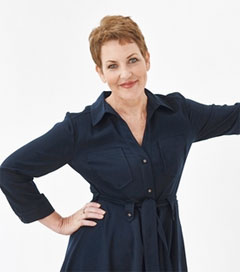 Author Deborah McKinlay, formerly of Auckland, has received a seven-figure advance and a lucrative film deal for her new book, That Part Was True.

McKinlay, who had been making a living as a jobbing non-fiction writer since moving to England 20 years ago, is receiving rave reviews in the United States and Britain for her just-released novel. American daily online newspaper The Record.com said: “This little gem of a book offers a story filled with emotional depth and richness.”

She has received an advance of more than a million dollars from American publishing giant Grand Central, and has also inked a deal with BBC Films for a big-screen drama. “The publishing deal was big enough to be quite shocking, surreal even,” Devon-based McKinlay told the Herald on Sunday. “It is the sort of thing most authors only dream about and it took me completely by surprise.”

That Part Was True charts the relationship between a UK divorcee and an American novelist through their shared love of food and cooking. BBC Films chief Christine Langan described McKinlay’s work as “stunning”.

She has published several non-fiction titles in the United Kingdom and her books have been translated into several languages. Her work has also appeared in British Vogue, Cosmopolitan, and Esquire.