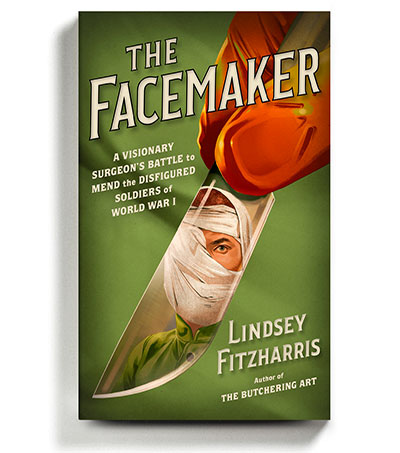 Lindsey Fitzharris’ new book The Facemaker recounts the life and work of the pioneering reconstructive surgeon New Zealander Harold Gillies, a specialist in mending those who survived the mechanised slaughter of World War I with an eye gouged out, or a nose blown off, or a jaw obliterated. Jennifer Szalai reviews the book for The New York Times.

“Such injuries were common enough that countries had special terms for the men who bore them: les gueules cassées (‘the broken faces’) in France or das Gesichts entstellten (‘the twisted faces’) in Germany. In Britain, where the [Dunedin]-born Gillies worked, these men were called the ‘Loneliest of Tommies’,” Szalai writes.

“Just as impressive as Gillies’s technical skill was his encouraging bedside manner. Fitzharris describes how men who were in constant pain, with injuries – a hole in the jaw, scarred eyelids – that made it unimaginably difficult to eat or to sleep, felt rescued from abject despair by the affable Gillies. ‘Don’t worry, sonny,’ he would tell them. ‘You’ll be alright and have as good a face as most of us before we’re finished with you.’”

For many years, Gillies’ home was at 71 Frognal, Hampstead, London. A blue plaque on the front of that house now commemorates his life and work.