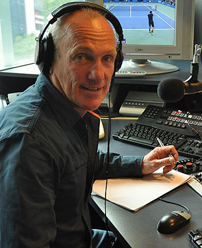 Highly respected veteran journalist Graeme Moody has died while surfing at New South Wale’s famed Angourie Point. He was 60. Wellington’s Newstalk ZB cancelled regular programming the day Moody died, such was the level of esteem they and the New Zealand media industry held for the popular sports commentator. Friend of 47 years and colleague Bryan Waddle told The Daily Examiner he had known Moody since they went to college together. Waddle said Moody was the type of person every parent would want their children to aspire to. “He had a great devotion to his wife and a love of surfing,” Waddle said. “He was very friendly and sociable and really enjoyed life. He was an outstanding rugby commentator, very professional and full of integrity.” A rugby union commentator, Moody travelled the world with the All Blacks and usually managed to combine his love of the game with his love for surfing.