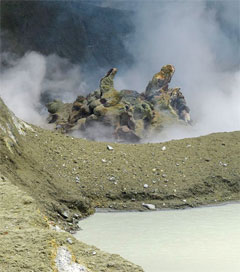 A peculiar lava spine between 20 and 30m across has appeared in the crater of White Island. Wired’s Eric Klemetti is “not even sure how to describe it.” “The lava forming it has to be highly viscous and somewhat cool to form those strange spikes coming off the top,” Klemetti writes. “The colour (yellows and reds) also suggests that the lava erupting has been pretty highly altered by hydrothermal gases (or that could have happened after the lava was extruded). Brad Scott from GNS Science said ‘in more than 30 years visiting White Island I’ve never seen anything like it.’ It is truly weird – not only because domes are fairly uncommon at White Island.”