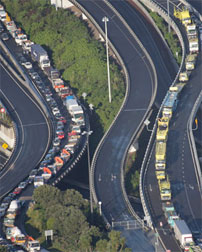 Auckland businesses have come out in favour of a surprising solution to finding the cash for mayor Len Brown’s $12bn transport improvements, Monocle correspondent Simon Farrell-Green explains: “A daily toll on the city’s motorway system that could bring in €430m a year. Auckland cannot afford to do nothing. It is one of the fastest growing cities in the Southern Hemisphere, with a population set to rise by 50 per cent to two million by 2030. Congestion costs the city €800,000 a year.”