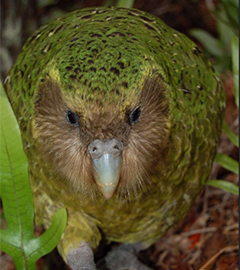 New Zealand’s own celebrity parrot, Sirocco Kakapo, has charmed Japanese audiences and gained thousands of new fans after being mentioned on a popular Japanese television show with an audience of over 10 million.

A presenter on the show, ‘Sekai no Hatemade Itte Q!’, mentioned a kakapo in New Zealand with his own Twitter account, however couldn’t remember the handle. Tourism New Zealand made the most of the opportunity, using it to introduce Sirocco to Japanese audiences and teach them a bit more about the unique native species.

“Looks like Sirocco is hooked on Twitter and Facebook! He said he wants a smart phone too, but the screen doesn’t work with his claws. There are only 124 kakapo alive today, and for Sirocco, every connection is an important one,” Tourism New Zealand tweeted.

In just a few hours the tweet was retweeted over 500 times and Sirocco gained over 2,000 new Twitter followers – all of whom lived in Japan. Sirocco made the most of the attention to tweet about New Zealand’s native fauna and flora, even issuing a tweet in Japanese – his most popular tweet of the night.

This isn’t the first time Sirocco has created a buzz on social media, with his mating attempt with zoologist Mark Carwardine on the BBC’s ‘Last Chance to See’ in 2009 achieving over 500,000 views on YouTube.